The conversation might have been the same, the setting was definitely not! Yet the morning hour of 1:30am is somewhat dead on where a inquiring bartender poses questions, challenges, curiosities, and “I rock out with you guys” admiration. All contemplations surrounding in their eyes the low brow but solid efforts of those behind Sailor Jerry. On this morning these efforts found this bartender and I kicking it on the sands of Mission Beach, San Diego with a bungalow backdrop and camp fire. Straight out of a beach scene from your favourite cult classic where the leather jackets, the band, and their closest playfellows laughed the killer night to bed. This night was Monday December 8th where Sailor Jerry globally proclaimed the past 24 hours as National Bartender Appreciation Day, where we rub the egos of the ladies and gents who take our orders and provide recommendations daily. 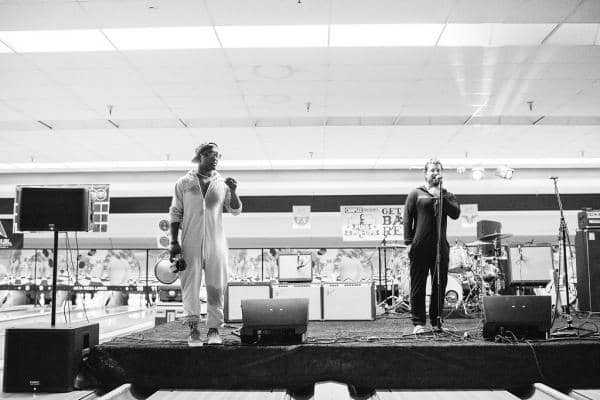 Seventy five barkeepers from as far as Jacksonville Beach, FL to Spokane, WA landed in sunny San Diego, CA courtesy of Complex Media, as Sailor Jerry played host.
Winners were pulled from the qualifying rounds of the Sailor Jerry bartender competitions held in their respective cities over the past few months. These 26 competitions did not include 1 ounce of homemade bitters or bow tie presented falernum; they simply included balls! Bowling balls not highballs. Our 2014 Pins & Pinups Bartender Bowling tour rallied through the states with teams of three competing against one another, representing some of our favourite adult hangouts around the country.  After each score was tallied and the Sailor Jerry bowling ball trophy was hoisted in each city, it was now time to see who wanted to get “lei’d”! San Diego, California on this night was the foreplay for the grand prize chance to get weird in Hawaii. Through the looking glass of Sailor Jerry, the winning team of our December 8th bowling competition would find themselves in Hawaii for Norman Collins’ birthday in January 2015.

Before the mahalo’s would be had, the west coast lifestyle of Sailor Jerry was going to be fully enjoyed by all the bartenders who made it this far. Guests were treated to palm tree - hidden digs and a pig roast welcome dinner at night fall. There was an outdoor screening of the Hori Smoku Norman Collins documentary, Smore’s over camp fire, and of course a Sailor Jerry bar to wash it all down. “To being barefoot on the beach in December” was the opportune toast the team from Boston, Massachusetts shared. After dinner, classic cars and low riders joined in the caravan to the venue where Sailor Jerry Pin-ups welcomed each team to their lane. DJ Tommy Gun provided the punk rock and northern soul sounds while Sailor Jerry cocktails flowed.

San Diego locals provided the character as crowds gathered for a chance to get into this “random” night that would also feature two highly anticipated sets by American country – punk rock band LUCERO. The packed house also included contest winners from around the country who bragged about their favourite bartender weeks before via Sailor Jerry social media channels. It sounds like the beginning of a joke when you have two idiots (myself and Paul Monahan) rolling around a bar in Sailor Jerry onesie’s emceeing a party, while you’re singing the lyrics to Lucero playing live on stage in between lanes 11 and 18 at a San Diego bowling alley that’s a stone’s throw away from a potential last call in Mexico. But it’s not a joke...it’s a tried and true Sailor Jerry affair, the reason why the aforementioned bartender from San Francisco and I thank each other for what we do and laugh off how we got here.

Congratulations to the crew from Downtown Los Angeles, who knocked down more bowling pins than the rest, and will be celebrating in Hawaii with us!
Signing off from the beaches of San Diego, it’s the rum rudeboy,
Daniel ‘Gravy’ Thomas
Sailor Jerry Brand Ambassador
Show More 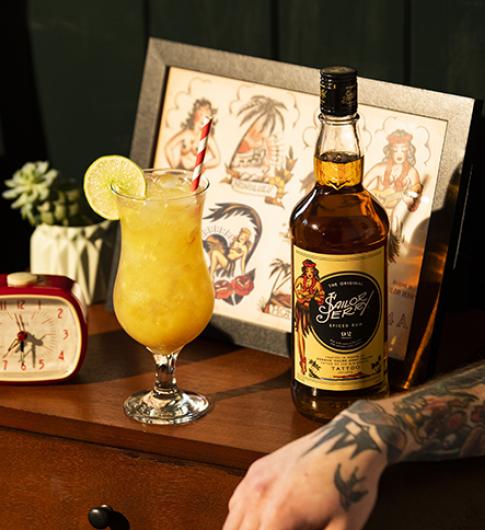 Combine your Banana Daiquiri ingredients in a shaker with ice & shake!