OUTSIDE THE LINES: DEAN DELRAY

Comedian Dean Delray’s movie and TV appearances include Quentin Tarantino's ‘Hell Ride’, Ice Cube's ‘The Longshots’ and the IFC series Maron. His podcast ‘Let There Be Talk’ is a unique blend of rock and comedy talk with some of the biggest names in the biz and is regularly in iTunes’ top 200. But like Norman Collins, who made up his own rules and had a hell of a good time doing it, Delray has no agent, no manager. He’s just doing his thing.

We sat down with the comedian, rocker, and biker in his hometown of Los Angeles to talk about his winding path to success from his 25 years in the music industry - touring with the Wallflowers, as well as opening for Tom Petty, the Black Crowes and many others - to his current position of in-demand comic, actor and standup comedian.

Says Dean, of his not-quite-overnight success: “People ask how I came up so fast. It’s because I work my ass off.”

Dean gigs seven days a week, often three different spots a night. By day, he’s either taping, editing, or hustling guests for his podcast. For the first five years of establishing himself as a comic, Dean did over 2500 performances (do the math), and is now a regular at the legendary Comedy Store.

Do you have an abiding philosophy about your work?

You can’t buy it. You can’t have your manager get it for you. If it was easy, everyone would do it. But you have to put in your time and work. Everything I’ve gotten is from working my ass off and being in the right place at the right time. Though luck is involved, I make opportunities for myself.

What was the turning point for you?

Maron changed my life, hands down. I was 44 years old when I started standup, which is pretty unusual.

(ED: Dean is referring to his April 2013 turn on Marc Maron’s WTF podcast. Dean’s appearance is one of the most epic and enjoyable of the over 700 WTFs episodes.)

Noel Gallagher of Oasis once said, regarding performing music versus comedy, “I can pulverize people with sound, but [in comedy] you’re standing there with your dick hanging out.” We asked Dean if there’s a harder job in show business, and given his resume, he would know.

I had no idea how hard it was gonna be. To me, I thought ‘You get some funny stuff together, people think you’re funny, and you start working.’ Then you find out REAL quickly that a lot of times it ain’t about being funny. It’s about the agent and the manager. And then it’s like, ‘Man, this is hard - I gotta pound some doors.’ I’m not afraid of some hard work - it doesn’t bother me.

With all your recent success, at what point did you sign on with an agent?

I STILL don’t have an agent or manager. I approach this in an old school way - like Metallica when they were coming up. I grew up in the Bay Area and saw it happen. If you believe in what you do, work hard, and if people dig it, they start spreading the word. Growing up in the Bay Area, even back to the Dead and Santana and all that early stuff, it was grassroots - spread the word, tell your friends, let’s go see some art.

Sorta like the way the word spread about the Bay Area itself when it was truly a haven for the counterculture.

Growing up in the city, it seemed like a secret that was eventually gonna get caught on to. We’re talking about one of the greatest cities in the world. Eventually people will be like, ‘Why am I not living here.’ In San Francisco, you could just be a total freak and be accepted. Piercings, body manipulations, the whole Fakir movement, the leather scene, tattoos… all of it.

You’ve got some impressive tattoos. 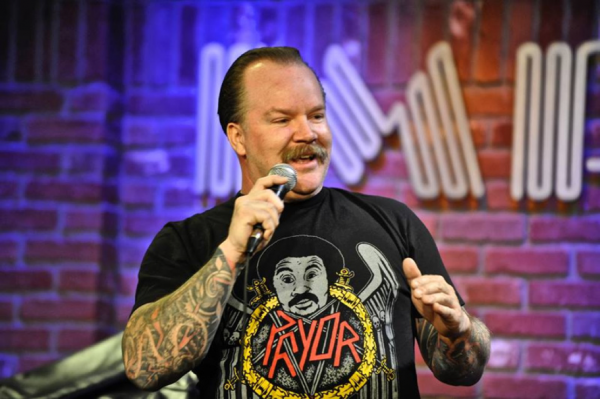 I love tattoos. Bill Salmon & Henry Goldfield did most of my work. They’re San Francisco legends. Once I saw Bon Scott as a kid with tats, I wanted them. [Dean’s first one was a skull with long hair smoking a cig - “Like me - a rocker with long hair.”]  I read somewhere that he hated them. Got ‘em in the navy or something. Nikko Hurtado did a Bon Scott for me. But yeah, back then Motley Crue had sleeves. [So it was like,] ‘I gotta get sleeves.’

But there’s been a major paradigm shift from the seventies to today  — as tattooing has transitioned from the subculture to the mainstream, so has society’s overall acceptance.

Once you got a tattoo, back then, you were OUT of society. When I got my first tattoo, my mom was like, ‘You’re never going to have a real job.’ And I was like, ‘GOOD!’ Now, you can work at Chipotle, neck tats and all. I don’t even think I have enough ink to work at Chipotle. Back then, it set you apart - you know… ‘Woah, that dude is a lifer.’

And the grassroots thing - that’s what I’m looking for. When people spread the word, it’s more powerful than any money you can throw at a promotion machine. It becomes this grassroots, full-blown, homegrown thing that everybody feels like ‘Oh, that’s ours.’ ‘Delray’s ours, man. We’ve been listening to his podcast for four years. He’s the shit.’  You know? And I think that a lot of people underestimate the power of their own word. Because they always say, ‘I don’t understand why you’re not huge?’ And it’s like, well maybe if you had complete passion and told everyone you know, like I did when I first saw Metallica back in the day, I would tell everybody: ‘You gotta hear this record NOW.’

How do you see this all going down in the comedy world? It is a straight analog to the music world? Are you recognizing faces at your gigs?

Absolutely. People are coming out, man. Here’s the thing: the podcast takes so much work to do, but it’s like having the ultimate billboard on Sunset Ave. Like, the amount of people that respond to it from around the world is incredible. It feels so good when people hit me up every day with ‘Dude I’m in Hong Kong,’ or ‘Dude I’m in South Africa,’ or ‘Dude I’m in Ireland’…or ‘Dude I’m in fucking Kansas’ or anywhere ‘and I’m listening to your podcast right now.’ When I started the podcast there were three listeners, maybe two. I think one was my mom, and the other one was me. Then it jumped up to 36 people. I was like ’Holy shit 36 people, man. 36 people are listening to this. That’s great. That’s 36 more people who will come to shows.’ And I know a lot of people would look at that and go ‘Ugh, only 36 people? I quit.’ But I was like, ’That’s fucking great!’ And it felt good. Now it’s absolutely massive. Podcasts in comedy are my favorite thing I’ve ever done, man. I feel like I played music for 25 years to get to this. Because if I hadn’t done that, I wouldn’t have all the stories and the knowledge and the experience to do everything I’m doing now. I wouldn’t have the connections to get guests on the show, or the confidence on stage. You gotta have mad confidence and not be afraid of the silence.

It was a long way to get here, but it’s worth it. Who cares if I ‘make it.’ I’ve already made it. I’m doing comedy, doing art. I fuckin’ love it.

LET THERE BE TALK: A five episode primer

Curated by Dean himself.

DDR: “I’m a Devo FREAK. I cold called and asked him to do it and he said yes. ULTIMATE interview ever.”

DDR: “He rarely does interviews, so it was really cool to have him on.”

DDR: “He’s from the Bay Area and so am I. He’s an absolute legend.”

One of Dean’s favorite examples of the “Handmade” series - about people that make stuff by hand - grassroots, outside the box, OUTSIDE THE LINES, if you will.